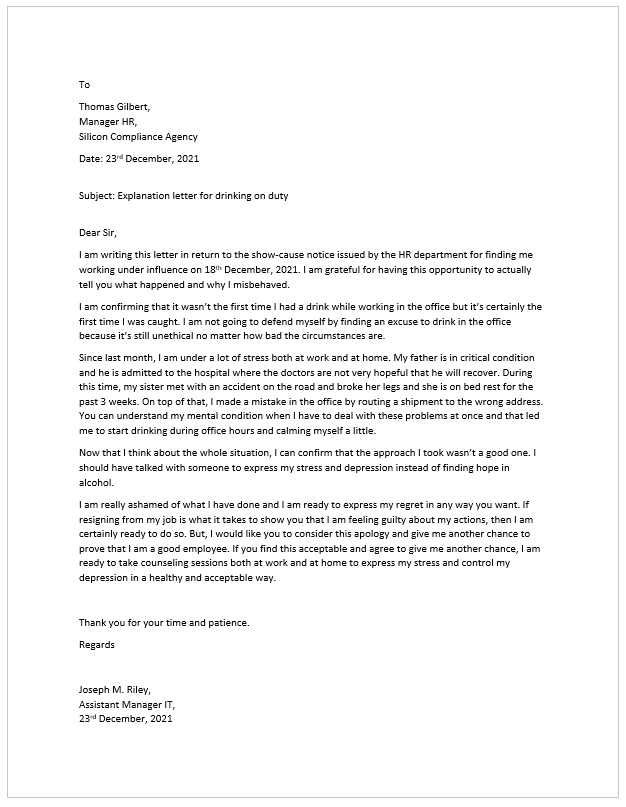 Drinking is not illegal or prohibited in most of countries around the world but it’s still unethical or restricted to drink while operating a machine or during work hours in the office. Companies and organizations have strict rules and regulations where no employee is allowed to drink alcohol or consume any sort of material that can influence their mind and decision-making abilities. Still, it’s possible that every now and then; some employee is caught drinking while on duty.

In most cases, such employees are immediately terminated from their position while in some cases; the employee is given a chance to explain himself. This is a fundamental right of every human being to be able to express himself and explain his side of the story. Sometimes, things are not exactly what they appear on the surface, and finding the story behind an incident might change the understanding. The letter written by the employee who was caught drinking on the duty is known as the explanation letter for drinking alcohol on duty.

Importance of Explanation Letter for drinking alcohol on duty:

As explained above that if someone is caught to be working under influence, they are immediately fired from their position because not drinking or using drugs on duty is basically the first rule that a workplace has. If a supervisor or manager catches an employee drunk on duty, they have the right to terminate the employee but in some cases, this situation backfires when the disgruntled employee files a lawsuit against the employer.

In order to save yourself and your company from such a situation, employers and supervisors usually give a chance to the employee for explaining himself. This is typically done with an explanation letter where the employee confirms that he was in fact drunk and then he explains the reasons for drinking on the job and lastly, he apologizes and promises that it won’t happen again. Depending on the sincerity of the employee and the overall tone of the letter, it’s possible that the employer gives a warning to the employee and another chance to him to prove he is actually ashamed of his actions.

Key Elements to add in the Explanation Letter for drinking alcohol on duty:

I am writing this letter in return to the show-cause notice issued by the HR department for finding me working under influence on 18th December, 2021. I am grateful for having this opportunity to actually tell you what happened and why I misbehaved.

Since last month, I am under a lot of stress both at work and at home. My father is in critical condition and he is admitted to the hospital where the doctors are not very hopeful that he will recover. During this time, my sister met with an accident on the road and broke her legs and she is on bed rest for the past 3 weeks. On top of that, I made a mistake in the office by routing a shipment to the wrong address. You can understand my mental condition when I have to deal with these problems at once and that led me to start drinking during office hours and calming myself a little.

Now that I think about the whole situation, I can confirm that the approach I took wasn’t a good one. I should have talked with someone to express my stress and depression instead of finding hope in alcohol.

I am really ashamed of what I have done and I am ready to express my regret in any way you want. If resigning from my job is what it takes to show you that I am feeling guilty about my actions, then I am certainly ready to do so. But, I would like you to consider this apology and give me another chance to prove that I am a good employee. If you find this acceptable and agree to give me another chance, I am ready to take counseling sessions both at work and at home to express my stress and control my depression in a healthy and acceptable way.

Thank you for your time and patience.

More from my site